You figure US Open’s “Billie Jean King Tennis Center” and “Arthur Ashe Stadium” names make sense given the contribution King and Ashe made to tennis, but what about Louis Armstrong Stadium?  Did Louis Armstrong even play tennis? So after google searching, here’s what I found out…

Louis Armstrong Stadium existed long before the US Open moved from Forest Hills.   Both Armstrong and the Grandstand began life in the early 1960s as the Singer Bowl, built by the Singer Sewing Company. The company fashioned the rectangular, 18,000-capacity venue in anticipation of the 1964 World’s Fair, donating the venue to the fair, after which it was supposed to be demolished. But it lived on, giving Singer some surprising returns on its initial one-off investment.

In 1973, a few years before it began hosting the U.S. Open, the venue was christened the Louis B. Armstrong Memorial Stadium, after the renowned bandleader, a Corona, Queens native, who had died in 1971. When the USTA left the Forest Hills Stadium for Armstrong in 1978, the name—grandfathered in at this point—stuck. The stadium was rebuilt for tennis, and, with some room to spare, the Grandstand tacked on too.

Up until 1997, Armstrong was the tennis center’s premier court, hosting each year’s finals. 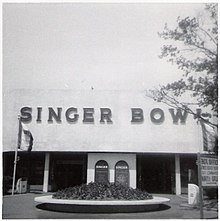