Fun Facts About the Ryder Cup from Mac Sports Travel

The Ryder Cup is less than 2 weeks away!  The current holders are the United States who won in 2016 at Hazeltine National Golf Club in Chaska, Minnesota, by a score of 17 to 11.

Since 1979, Europe has won ten times outright and retained the Cup once in a tied match, with eight American wins over this period. In addition to players from Great Britain and Ireland, the European team has included players from Belgium, Denmark, France, Germany, Italy, Spain and Sweden.

The Ryder Cup, and its counterpart the Presidents Cup, remain exceptions within the world of professional sports because the players receive no prize money despite the contests being high-profile events that bring in large amounts of money in television and sponsorship revenue.[2]

Below is a great article on the trophy: 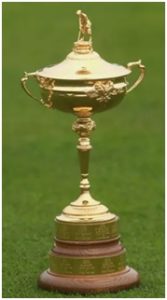 The creation of the Ryder Cup trophy began in 1926 when the competition’s namesake put up money for it.

Samuel Ryder, a Brit, an avid golfer, and a successful businessman, commissioned a trophy in 1926 to serve as the prize in a proposed goodwill competition pitting British professional golfers against their American counterparts.

Ryder spent £250 to have the trophy created. It was designed by the Mappin & Webb Company in the form of a golden chalice, with the small figure of a golfer on top of the lid.

That trophy is the Ryder Cup.

The Ryder Cup trophy first appeared in public in 1927 at a send-off for the British team departing Southampton, England, and sailing for Worcester, Massachussetts, for the first Ryder Cup match.

The Ryder Cup trophy is:

The cup sits atop a wooden base, around which are gold bands. On the gold bands are engraved the scores of each Ryder Cup played. So the wooden base will have to expand at some point to accommodate more scores, as the competition moves forward.

Who Is the Golfer on Top of the Trophy?

Atop the trophy is the figure of a golfer. Is that little guy on top of the Ryder Cup representative of a real golfer? Yes. That figure is modeled on British professional golfer Abe Mitchell. Mitchell was a friend of Samuel Ryder and was Ryder’s golf instructor beginning in 1925.

No — but that original Ryder Cup trophy is still in existence. According to the PGA of America, Samuel Ryder deeded the original trophy to The Professional Golfers’ Association of Great Britain.

Today, the PGA of GB&I still has the original trophy.

The PGA of America, meanwhile, owns an exact replica. A third identical copy is kept for touring purposes; when you see (or hear about) the Ryder Cup trophy being displayed somewhere (making a public appearance, so to speak) it is this third trophy that is “on tour.”

And each member of the winning Ryder Cup team receives a slightly scaled-down replica of the trophy to keep.

How Much Do Tennis Umpires Get Paid?
IT’S A WONDERFUL WORLD!