Many people ask us why is the BNP Paribas Open at Indian Wells one of our favorite tournaments. Outside of the Grand Slams, this is the most attended tennis event in the world. It is referred to as the “5th Grand Slam”. The location is unique nestled at the foot of some majestic desert mountains, this setting in Southern California will take your breath away. And the purse is the fifth largest in the world.

The tournament offers more than $10 million in prize money with each of the Champions earning a $1 million prize purse. It is the only professional tournament in the world that provides Hawkeye, the official line-challenge system for players, on all match courts for both main and qualifying rounds.

So why do we recommend the tournament so highly – we answer the key questions:

Are these the best men and women in the world?

Certainly. Past champions are Federer, Djokovic, Nadal. On the women’s side, it’s been Azarenka, Sharapova, Williams.

Each year the tournament gets better and better about getting the fans near the players. On the practice courts you are literally sitting just a few feet away. Mostly the players play practice sets against each other. It is intense and highly competitive. But you also might see a player hit some balls with his 5-year-old son. You might see two women in the top ten, playing a game of short court. Even the stadium courts feel incredibly intimate. Tennis is only fun when you feel like you’re a part of the action, when you can feel the battle, the heartbreak, the triumphs.

What else is there to do at Indian Wells? 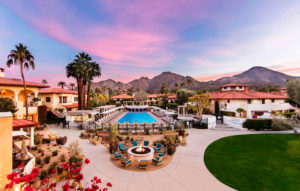 We love Indian Wells and Palm Springs, especially when you can get up on a warm morning, go and play tennis for a couple hours, either in a USTA tournament, or hitting with professional coaches improving your game. After playing tennis, we head back to the hotel and soak off in the swimming pool or relax in the spa. Then we go to the BNP Paribas Open. Next, rinse and repeat

There is also the unique desert city of Palm Springs nearby with its Art Deco flavor, lots of interesting shops to browse and restaurants to try. Cactus soup anyone?

Going to the BNP Paribas Open is a little like being at a garden party with the gods. True, it’d be nice to hit some balls with them, but this might be the next best thing.

For further information please email our tennis directors Carlos or Michael at tennis@macsportstravel.com or call 888-862-7668

BNP Paribas Open packages can be found at https://macsportstravel.com/tennis/bnp/