To Check or Ship Your Golf Clubs: 4 lessons to consider when traveling for golf

Most individuals plan vacations to remove themselves from the stress of home and work; however, very few people actually take the stress of travel into consideration. When traveling out of state, the first obstacle that people generally encounter is the airport. Significant TSA regulations, baggage checking procedures, egregiously overpriced food, a dirty environment, and many other various factors can collaboratively contribute to a stressful start to one’s vacation. This said, why not try to eliminate the stress as much as possible? If you are going on a golf trip, this means that you should very much consider shipping your clubs beforehand to ensure that they arrive in proper condition and on time to your intended destination. Obviously, shipping your clubs separately may take a little more effort prior to the onset of your trip, but hopefully, this article will convince you that taking the extra mile in this instance may be worthwhile. 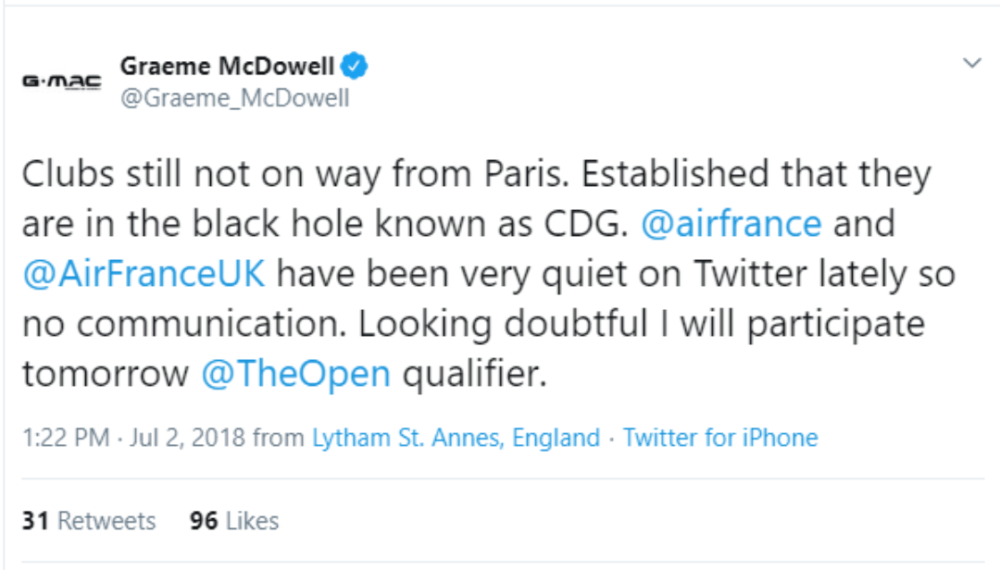 At the top of this list is professional golfer Graeme McDowell. On his way to the Open Qualifier in Manchester, England, his airline left his golf clubs in France. It was the biggest golf tournament of the year and his clubs were lost! Even though the flight was only about two hours, the baggage claim workers still messed up and unfortunately, McDowell had to eventually withdraw from the tournament.

A few days later, Air France recovered his clubs and sent them ahead to his next event in Ireland, but by that time, the damage had already been done. 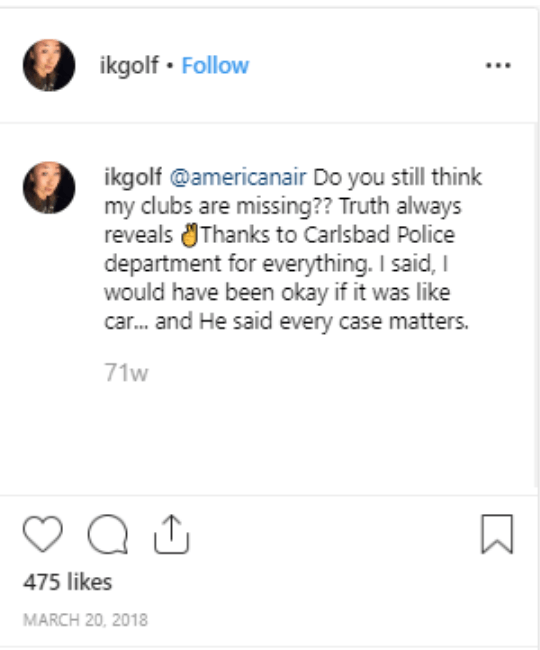 In-Kyung Kim, the 7th ranked female player in the world, has a bizarre story about her clubs. Kim took an American Airlines flight in January of 2018, where they lost all her bags, including her bag of clubs. Kim’s clubs were no longer in production, as she had been using them for so long, so even replacements did not do her justice.

Several weeks later, the clubs had still not been found, and she ended up shooting a YouTube video on her favorite clubs titled: “What’s in my bag?” This video captured the attention of some Southern California based golfers, who had seen her clubs for sale at a local golf store in Southern California. Shockingly, the clubs were only priced at a measly $60! Just goes to show, it’s not the clubs, it’s the player that counts.

Thankfully, Kim was able to contact the Carlsbad Police Dept. who immediately went to the store to retrieve her clubs and return them to her. 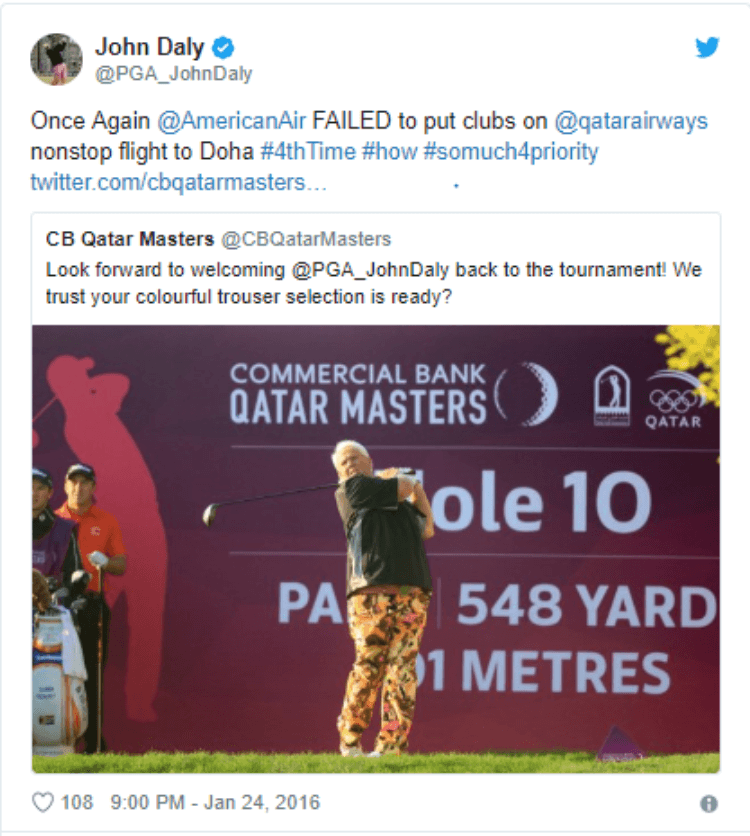 The living legend John Daly was steaming after a big screw-up by American Airlines. In 2016, Daly was on his way to the Qatar Masters, one of the largest tournaments in Golf. However, the airlines lost his bags both to and from the tournament. Understandably, airlines lose bags all the time, but losing the bags twice for a high-profile golfer is on another level. 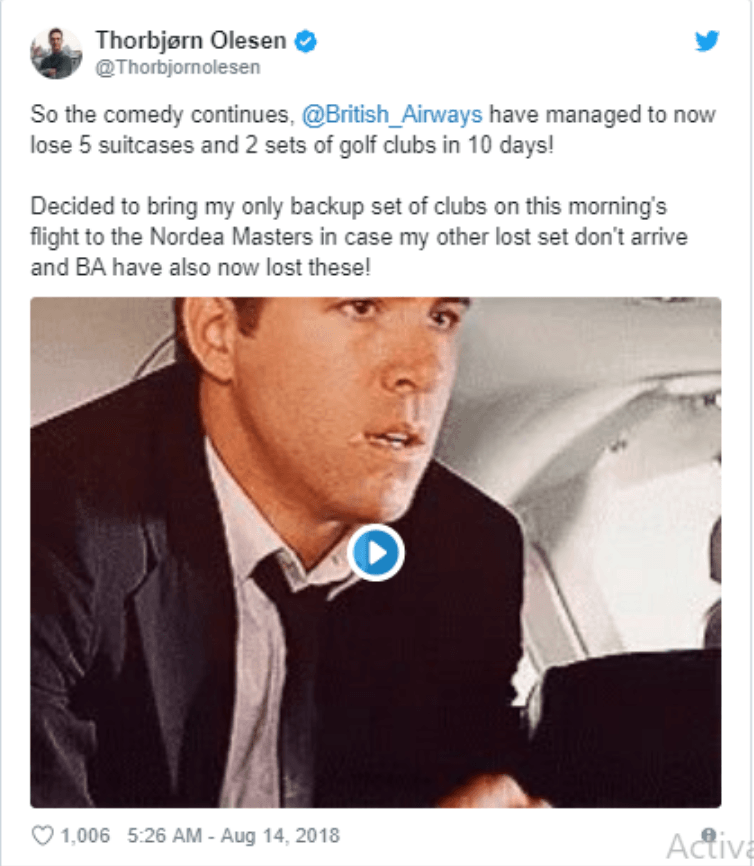 Saving the best for last: 6th ranked European Player Thorbjorn Olesen. Obviously, as with John Daly, it’s shocking when an airline manages to lose golf clubs twice for one person. However, for Olesen, British Airways somehow managed to lose 2 sets of clubs and 5 suitcases in 10 days.

As Olesen was flying to the PGA Championship, British Airways lost a set of his clubs during a layover. He quickly came to the realization that his first pair of clubs would probably not be found and decided to ask his sponsors for an emergency set of clubs, as he would be traveling straight from the PGA Championship to the European Nordea Masters. Incredibly, however, American Airlines managed to lose the backup clubs as well, along with five of his suitcases.

Hopefully, his luck balanced itself out on the golf course.

Needless to say, trusting your prized clubs to an airline check-in may not always be the best idea. Get in touch with MACSportsTravel.com today, and we will take care of every detail of your travel and make sure that your clubs ALWAYS arrive safely to your destination!

The Grand Slam Tournaments Explained: Finally understand what all the hype is about
Top 10 Reasons to Head Down Under!