The Scariest Things to Happen in a Golf Tournament

Golf is a grueling sport, with even the best athletes from other sports struggling to play golf in a professional capacity. Tony Romo claims it’s the “hardest thing he’s ever done.” Michael Jordan says that he will “never be able to play this game at a high level.” Professional tennis player Ivan Lendl was probably the highest achieving golf player, and even he could not qualify for the U.S. Open.

Unlike other sports, there is no optimal physical shape or strength that gives a significant advantage in golf. Even with superior fitness and a physical upper hand, many people struggle. This said, there are various shots in the sport that require more mental toughness than others. With Halloween coming up, we followed a survey by pga.com of the self-reported “scariest” shots in golf. Don’t have nightmares after reading this! 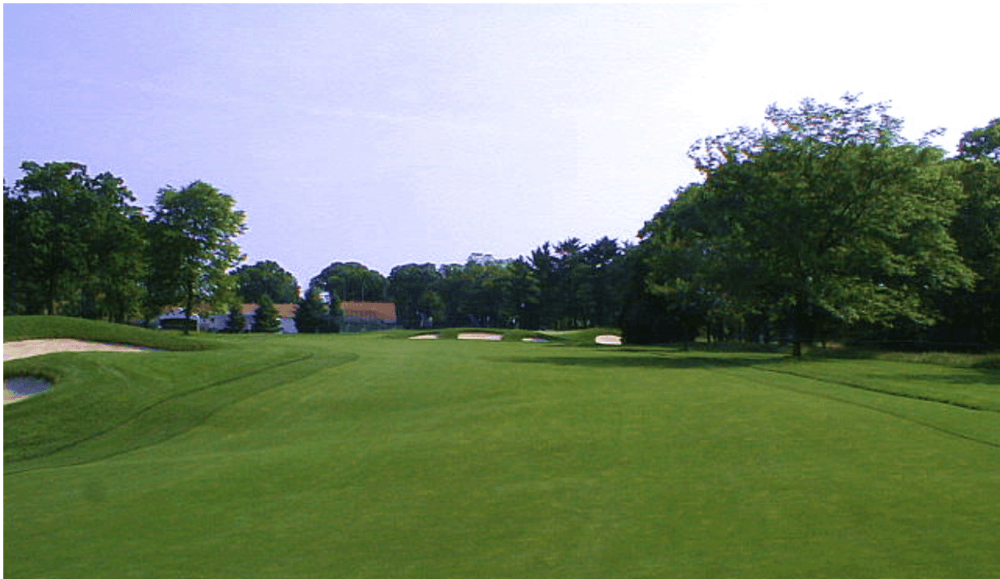 This shot is a pretty well-known one. It’s a 608-yard par 5 that starts with a dogleg right tee shot over a long series of bunkers. Many pros are expected to make it there in 2, hitting an eagle or birdie at the least. However, many fall deficient due to their inability to drive the ball 300-400 yards. If you fall short, as many amateurs do, you have to attempt to still navigate the dogleg with your second shot. A professional golfer stated: “Unless you’re McIlroy, who hits the bejeezus out of the ball, I say nobody gets there. To get there in two, you have to hit a good tee shot, then cover the cross bunker with a 3-wood. You never know with this one.” Basically, you just have to close your eyes and smack the heck out of the ball, giving it your best wishes. 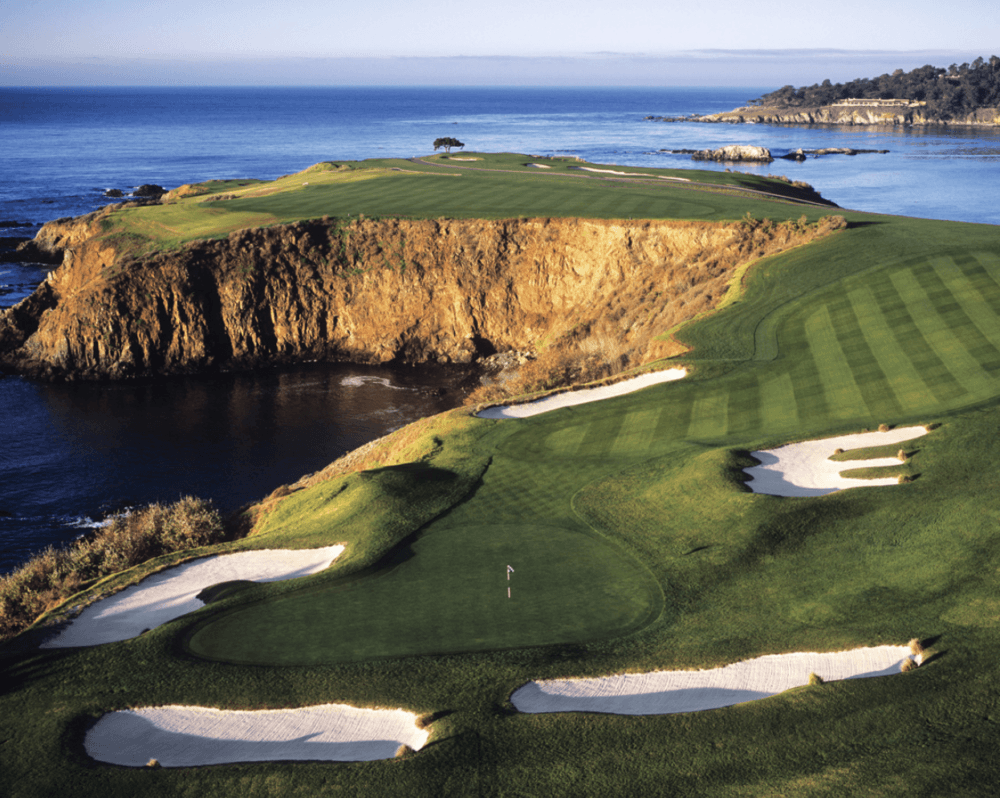 The notorious eight hole is a whopping 462 yards, and has a steep dropoff straight into the pacific ocean. The hardest part of this is indefinitely the green. Like the majority of Pebble Beach’s surfaces, the green on hole 8 slopes backwards to frontwards, breaking towards the treacherous pacific ocean. Without a solid approach, you’ll likely hit it long. Be sure to watch the break, there’s almost 4 feet of it. Right-handers will miss this shot four times as often as left-handers will, so there’s a huge disadvantage for most here. 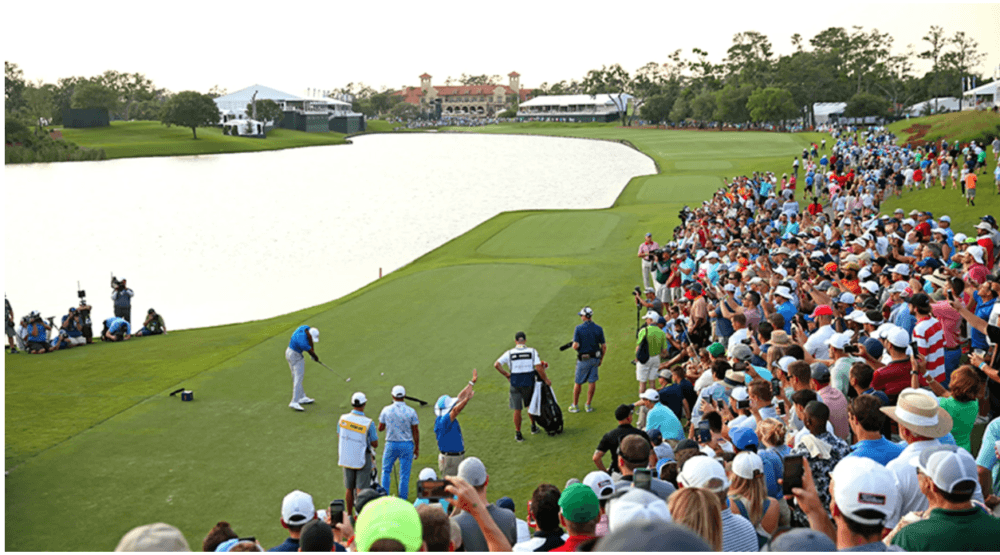 This shot is the last in the tournament, and has wrecked many golfers in the running for a championship. Additionally, in 2006, the PGA added about twenty extra yards of length to the course. To the left, there is water that hugs the green and fairway all the way around. To the right, there are sand hazards and numerous trees, blocking out any ability to cut the ball. This course requires amazing precision and an excellent setup for the 462 yard shot. Lastly, a tiered green causes significant problems on the last part of the hole. A long approach will be catastrophic, with extreme hills and a bunker right behind it. 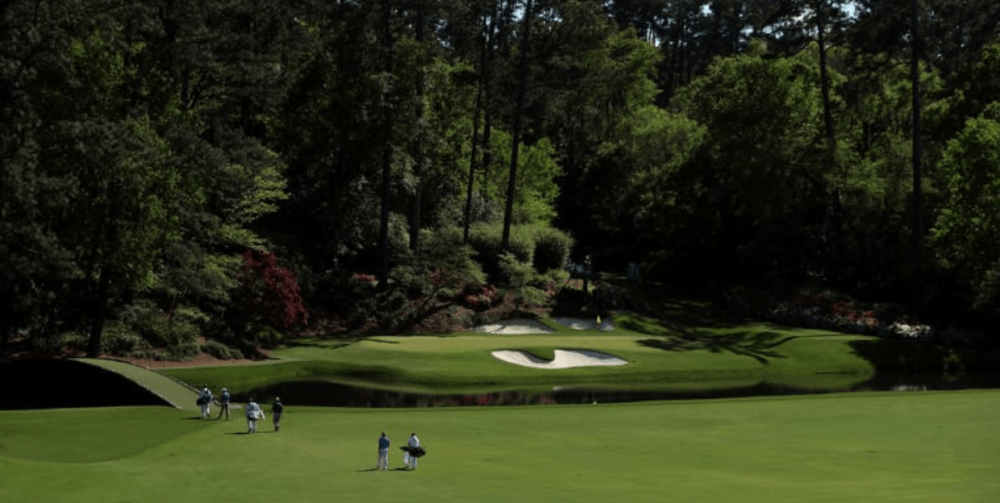 This hole is easily one of golf’s most notorious holes, regardless of its short part 3 of only 155 yards. First off, club selection is extremely variable, as the consensus of professional golfers varies from using a 6 to a 9-iron. The hole has a scoring average of 3.28, making it the fourth-most difficult on the course and is notoriously present over Rae’s Creek, the popular water hazard present in shots 11 through 13. Additionally, the green on this hole measures only 3,200 square feet and 105 feet wide, making it 50% smaller than the average green at Augusta. A long shot will kick the ball into spines, pine trees, azalea flowers, and a pair of treacherous bunkers. A short shot will likely make you bogey into the water hazard. The most significant factor, however, is the wind; NBC sports commentator and Masters champion caddy Jim Mackay stated: “if you stand there long enough, you’re going to feel the wind blowing every single direction possible, and it can certainly get in your head a little bit.”

At 229 yards, this is not an easy par-3. Pete Dye, the architect who made the course, is hated by many golfers, professional and amateur. They believe that he is a “diabolical genius” and “mad scientist,” as his 17th hole is considered his most mischievous and successful collection. The putting surface is a good 44 yards deep, but there is only about 15 yards of grace room on either side of the green. Water climbs up close to the right of the green, leaving little to no room for error. Missing left, however, is treacherous. There are two sand pits on the left, making a hit left to try to bail out pretty much impossible. If that’s not enough, scores are consistently kept high by the unpredictable wind, which blows golf balls in random directions due to the Atlantic coast gusts. Many golfers have lost tournaments due to this hole, and many more will in the future. 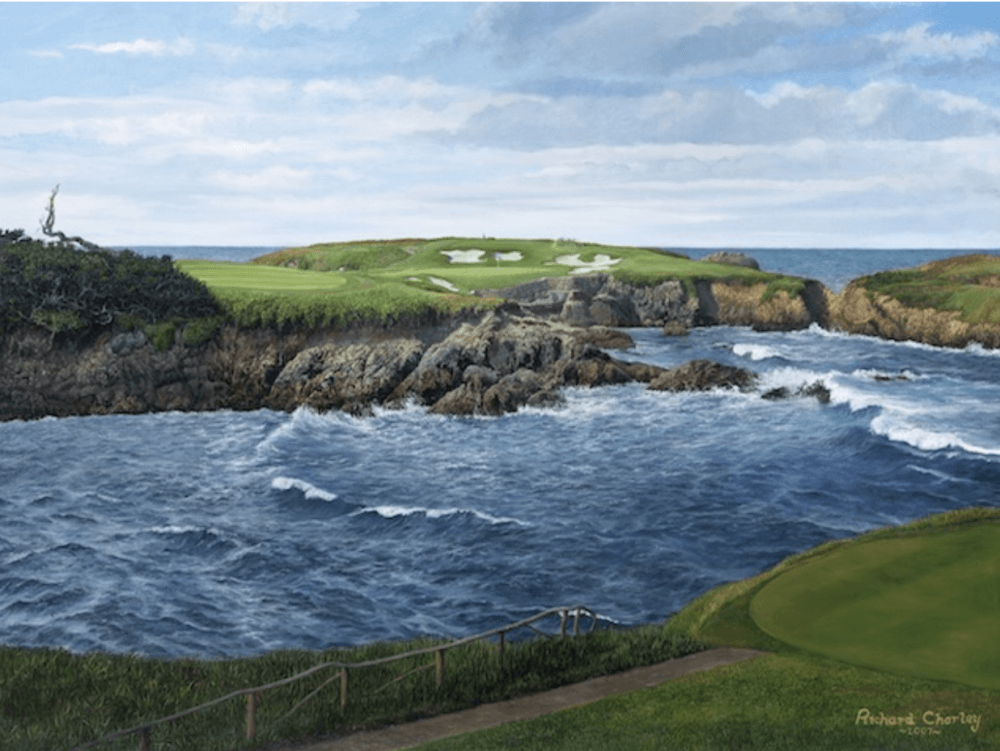 This one is nicknamed the “Sistine Chapel of Golf,” and rightfully so. The wind is ridiculous, and waves continuously crash onto the rocks that uphold the elevated green. It’s quite gorgeous and is widely considered one of the most beautiful holes ever created, but leaves no room for error. Golf professional Alister Mackenzie stated: “There are two options: either drive the ball over the ocean to the green, or play it safely to the fairway on the left.” Because of the short 233 yard distance, few individuals are able to resist the temptation of seeing if they can drop the ball on the tiny green inlet, causing plenty of unlucky golf balls to be eaten up by the ocean blue. 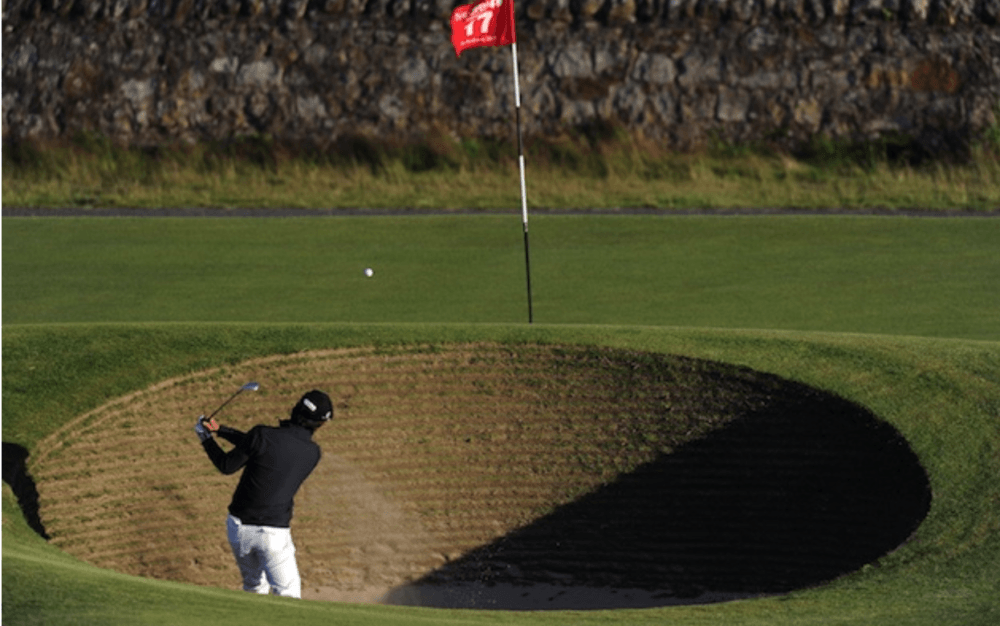 The 17th hole at St. Andrews contains the infamous “Road Hole Bunker,” a 6 foot sand drop that’s virtually impossible to recover from. The 495 yard par-4 is gruelin enough on its own. However, birdies are rare on this hole, and most professionals are simply lucky to par. The tee shot starts with a blind hit over the on-course hotel. Some people play a little more conservative and play around the hotel, but would force a difficult 235 yard shot to a narrow green. Additionally, the second shot requires amazing precision onto the green. The fairway is quite hilly, with unpredictable movement of the golf ball when it rolls, easily guiding the ball to the Road Hole pit. This requires an enormous amount of skill to pinpoint the ball onto the green in one shot. The beauty of this hole’s difficulty is that it’s progressive; no one shot will decide your fate. Your skill undoubtedly needs to be maintained and displayed over the duration of the entire hole.

This is one of the most famous holes in golf history, simply due to its rich history as the birthplace of golf. The course is highly expansive, making it beautiful and very open. The wind can be a little problem, but otherwise it’s very mild compared to the rest of the holes. The main quandary with this hole is simply the amount of people present watching you tee off. The history and the multitudes of people watching and judging you is widely considered nerve wracking to the max. 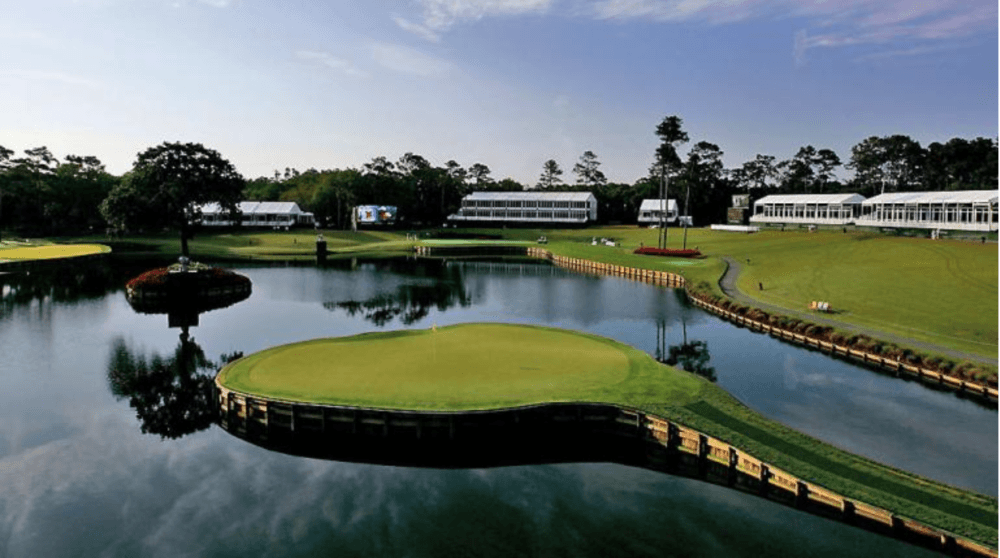 By far, this hole received the most votes from individuals. The most famous shot in golf, this par-3 was created by accident, when the construction crew accidentally dug out too much ground from around the hole. The do-or-die nature makes the hole a decisive one for a round, and can make or break your day near the end of the set. The hole is only 140 yards long, but the skill required is bar-none. This hole would be a lot more bearable if it was in the beginning of a round, but since it is near the end, golfers think about it constantly, even if they are having a good day. With no bailout and no room for error, professional golfers dread the element of luck and skill that this shot requires.

Tips For Playing Tennis In The Summer
The Who is Who of Golf: The founding fathers of our favorite sport