A Tribute to Dad

It’s almost Father’s Day. It’s time to watch dad put on his “kiss the cook” apron and dish out some good ole barbeque. It’s also a good moment to pay a little tribute to our fun-loving professional tennis and golf playing dads.

Let’s start it off with Tennis Player Nicolas Mahut’s who is trending quite a bit on the web this week. After an emotional loss at the French Open, Mahut was holding back tears as his son ran across the court and gave him a big hug. Captured on video, the sweet moment is now capturing hearts everywhere. Even Mahut’s opponent, Leonardo Mayer appeared to have been holding tears back as well. While he didn’t win the French Open, Mahut and his son won a lot more that day.

Our next dad is Roger Federer, professional tennis dad who won his 20th grand slam title at the Australian Open in January of 2018. Plenty of videos online show how Federer’s 4-year old twin boys are already geared up and ready to follow in dad’s footsteps.

Arthur Ashe is a big name in tennis and his love for his daughter was even bigger. With wife, Jeanne Moutoussamy-Ashe, a girl was adopted in 1986 and named Camera. This name was chosen based on Ashe’s wife’s profession. Ashe was the first and only African-American tennis player to win the men’s singles title at Wimbledon, the US Open and the Australian Open.

Lars Ulrich, not well-known for his tennis history but more as the drummer of Metallica comes from two generations of professional tennis players. The journey starts with Einer Ulrich, a Danish tennis player who played in the 1924 Olympic Games and continues to Torben Ulrich who won Grand Slams in the Australian Open, French Open, US Open and Wimbledon. 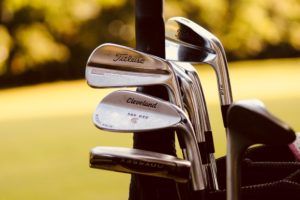 Now, let’s talk about our fun-loving golf dads. There are many professional golfers who were introduced to the game by their dads and this is definitely the case with the fathers listed below.

Let’s kick things off with father-son golfing duo Bing and Nathaniel Crosby. Music and Movie star Bing Crosby? That’s right. Crosby and his son, Nathaniel both loved golf. Bing competed in the U.S. and British Amateurs and started the Crosby Clambake in 1937, which became the Pebble Beach National Pro-Am. Nathaniel competed and won in the 1981 U.S. Amateur and played in the Walker Cup.

Another father-son duo is Tom Morris and his son. Tom Morris Sr., is known as the godfather of St. Andrews and the founder of modern grounds-keeping and a innovate club maker. Tom Morris Jr., won four straight Open championships.

Last but not least is another name that has made headlines and even recent ones by taking home his fifth Masters win, Tiger Woods. Father to Sam (daughter) and Charlie (son), Woods shares hugs, kisses and has had his cute kiddos assisting him through his golfing career. They even trailed behind their dad in white golf caddie uniforms during an event.

There is no lack when it comes to great fathers in the world and each of us believes our own dad is the best. So when it comes to father’s day, maybe it’s time to think outside the box and get dad a present he’ll really enjoy. Ties are great, but when you compare it to some of these gifts they don’t hold a candle.

For Dads who Love Golf

For Dads who Love Tennis

If you are looking for something extra special for your dad this year, treat him to a trip of a lifetime with MacSports. We offer life-changing and affordable golf and tennis packages that your dad will fall in love with.

Brighten Up Your Fourth of July
"Show Me The Money"